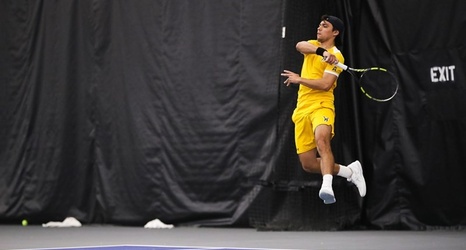 WICHITA, Kan. - No. 34 Wichita State men's tennis won its first match of the weekend be beating No. 48 SMU, 4-1, for the series sweep of the Mustangs at the Coleman Tennis Complex on Friday.

Doubles
Marius Frosa and Murkel Dellien impressed in their first match since jumping back into the rankings at No. 72. The pair had to fight back after SMU drew the match at three all, but the All-American duo was able to win the next three games to pick up their fourth straight match with a victory over Chakravarthi/Vrbsky, 6-3.