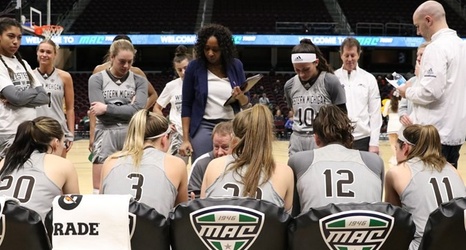 CLEVELAND, Ohio – Western Michigan women's basketball was eliminated this afternoon in the Mid-American Conference quarterfinals at the hands of the Buffalo Bulls by a final score of 63-49. The Broncos finished the season with an overall record of 16-14.

The first quarter of play began with redshirt sophomore forward Taylor Williams getting WMU on the scoreboard first thanks to an old fashioned three-point play. The Bulls responded with an and-one of their own shortly thereafter and the teams traded scores until the first media break at the 4:42 mark, when Western Michigan found itself holding an 8-4 advantage.