WMU women's basketball loses back and forth game to BGSU, 72-63 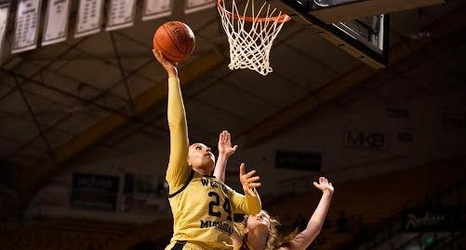 The Western Michigan women’s basketball dropped their second consecutive game, losing at Bowling Green, 72-63, Wednesday night. The Falcons (8-10, 1-5) picked up their first win in Mid-American Conference play this year as WMU (10-7, 3-3) fell to .500 in conference action.

The first quarter was full of scoring runs, seeing the Falcons jumping to a 7-0 lead early before Western bounced back with a 12-3 run of their own. Another seven-point burst from BGSU made it 17-12, Falcons, and the first quarter would end at 19-14 in favor of Bowling Green.

The two teams traded baskets for much of the second quarter, with WMU going into halftime trailing, 35-29.