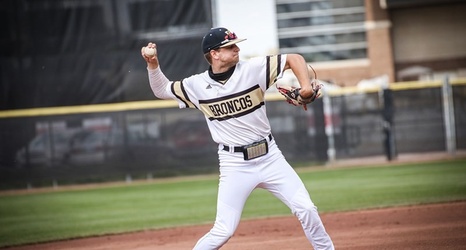 KALAMAZOO, Mich. – On Saturday afternoon the Western Michigan baseball scored eight runs on 17 hits in a doubleheader split against Kent State, winning the first game 6-5 in extra innings before falling in the second game 9-2.

The Broncos scored eight runs on 17 hits in the Saturday doubleheader as WMU had five batters hit over .300 against the Golden Flashes. The Broncos had three players with double digit RBIs led by sophomore Jimmy Allen with a .571 batting average. Allen along with junior Sean O'Keefe and senior Logan Hudson each had two RBIs on the day.