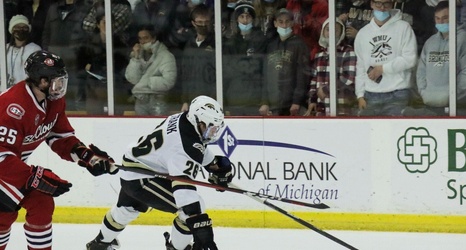 No. 7-ranked Western Michigan hockey capped off the weekend by defeating the St. Lawrence Saints 5-1 Saturday, earning its second sweep in a row. After the weekend, the Broncos improved to 10-4-0 overall on the year.

The Broncos scored an overall of 13 goals while allowing just three over the course of the series.

The Broncos would strike again early just like it did Friday night. Within the first four minutes of action, captain Paul Washe fired a shot off the crossbar to find the back of the net on the power play to put WMU up 1-0.