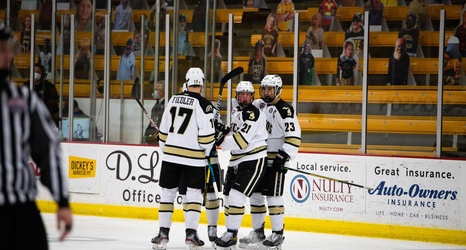 Western Michigan hockey was looking to avoid its first sweep of the year as they squared off against the Denver Pioneers in a two game series finale Saturday. The No. 9-ranked Broncos suffered a 5-2 loss to the No. 14-ranked Pioneers.

This was the first time this year that WMU has been swept and drops the Broncos to 6-4-0 overall and 1-3-0 in the NCHC.

Freshman Max Sasson scored the first goal of the game and his first of his college career to give the Broncos a 1-0 lead at the 9:36 mark of the first period.