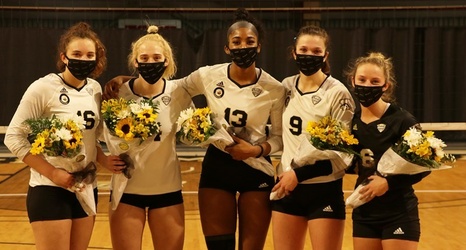 KALAMAZOO, Mich. – In the final match of the regular season the Western Michigan volleyball team defeated the Golden Flashes of Kent State in three sets (25-18, 25-22, 25-15) on Saturday afternoon inside University Arena to secure its third straight sweep.

Western Michigan has now won 11 of its last 12 matches including three straight 3-0 victories. WMU ends the season with an overall and MAC record of 17-4 and is the No.2 seed in the upcoming MAC tournament. WMU will square off with No.3 seed Ohio in the MAC Tournament Semifinals on Friday, April 2 at 7:00 p.