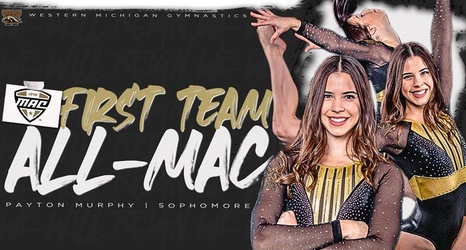 KALAMAZOO, Mich. -- In a season that saw her set the school record for all-around score and tie a 17-year-old record on balance beam, Western Michigan sophomore gymnast Payton Murphy has been voted first-team All-Mid-American Conference by the league's coaches.

Murphy is one of three gymnasts selected to the first team for 2021, joining the Central Michigan duo of Hannah DeMers and Katie Kowalski. Murphy becomes WMU's first selection to the All-MAC first team since Jenni Buis in 2015. The MAC specialty awards (Gymnast of the Year, Specialist of the Year, Senior Gymnast of the Year, Freshman of the Year and Coach of the Year) will be announced following the completion of the 2021 MAC Championships, slated for Saturday, March 20, at University Arena.