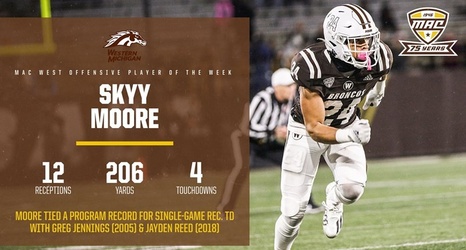 KALAMAZOO, Mich. – Sophomore wide receiver Skyy Moore had a game for the record books on Tuesday at Northern Illinois in a 42-21 victory over the Mid-American Conference West Division Champions, and was named MAC Offensive Player of the Week Tuesday by the league office.

He piled up a program record-tying four receiving touchdowns, a career-best 206 receiving yards and 12 receptions as the Broncos earned their seventh win of the year.