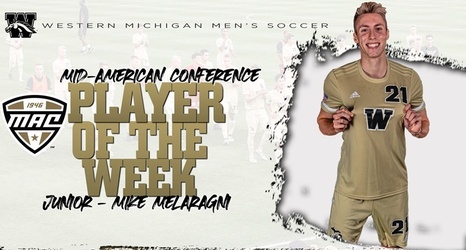 CLEVELAND – Western Michigan men's soccer junior forward Mike Melaragni has been named the Mid-American Conference Player of the Week for his performance in WMU's 2-1 win over Bowling Green last week.

Melaragni earns the honors for the second time this season after he posted a goal and an assist in the victory over the Falcons. The Rochester, Mich., native directly set up the Broncos' first goal of the game in the 15th minute by Dylan Sing. Melaragni himself made it 2-0 Broncos with his fifth goal of the season in the 19th minute.