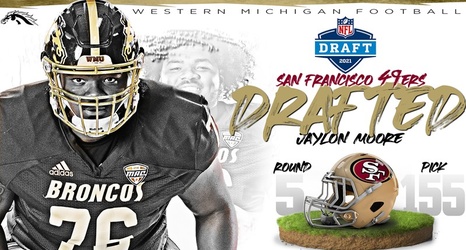 KALAMAZOO, Mich. -- Western Michigan offensive lineman Jaylon Moore became the second Bronco taken in the 2021 NFL Draft on Saturday, May 1, when he was selected by the San Francisco 49ers in the fifth round (155th overall).

Moore played in 36 games over his WMU career, including all six games last fall. In 2020, he helped block for a WMU offense that ranked fourth in the MAC in yards per game (479.7). In the last full season, 2019, the Broncos finished in the top-three in the league in yards per game (445.