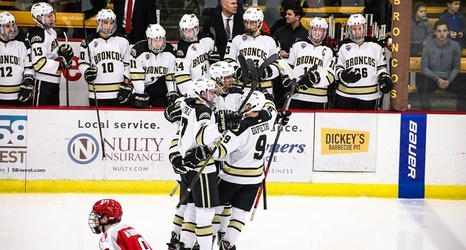 KALAMAZOO, Mich. – The Western Michigan hockey team won its sixth-straight home gave after completing the sweep of Rensselaer with a 6-2 win on Saturday night.

Senior defenseman Cam Lee had two goals and an assist for a three-point night and was joined by sophomore forward Drew Worrad, who had three assists to lead the Broncos (14-10-2, 8-6-2-2 NCHC). WMU also picked up goals from Ethen Frank, Lawton Courtnall, Austin Rueschhoff and Jason Polin. Freshman goalie Brandon Bussi made 21 saves, including 13 in the second period, to pick up his 14th win of the season.