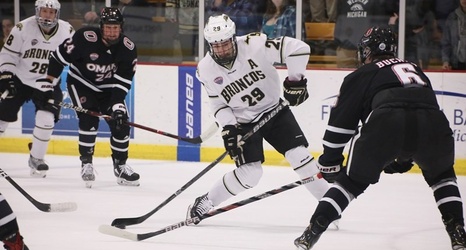 THIS WEEK
Western Michigan returns to the friendly confines of Lawson Ice Arena to host North Dakota on Friday and Saturday. Friday's game starts at 6:30 p.m. due to national television coverage by CBS Sports Network. Saturday's game starts at the normal time of 7:05 p.m.

TRAFFIC ALERT
Due to an event at Miller Auditorium on Saturday, hockey fans are encouraged to arrive early to the game to avoid traffic issues outside of Lawson Ice Arena. Doors open an hour prior to puck drop.

LAST TIME OUT
WMU is coming off a bye week but prior to that the team went to Omaha and split with the Mavericks.