Hockey earns point in weekend series against No. 3 North Dakota 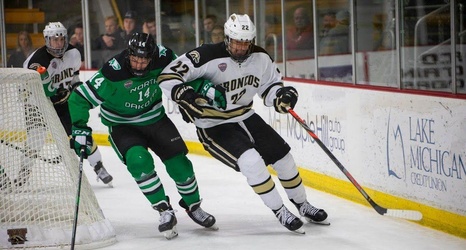 The Western Michigan Broncos suffered a sweep against North Dakota in one of its most physical contests of the season. The first game was a heartbreaking 1-0 loss for the Broncos which ended in overtime. In the second game, the Broncos surrendered 8 goals to the Fighting Hawks while only scoring two.

In the first game, the Broncos (7-7-2) outshot North Dakota 41-34, but couldn’t find the open net. Western’s best scoring chances came from Dawson DiPietro who hit the post of the net. The second opportunity came from Ethen Frank, who shot a laser but it was gloved down by North Dakota goaltender Adam Scheel.