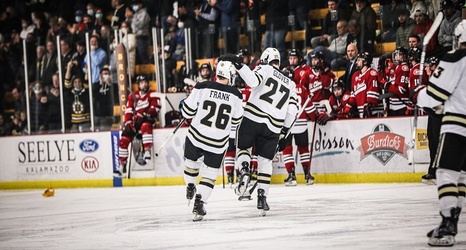 CANTON, N.Y. -- The seventh-ranked Western Michigan Hockey team won its fourth game in a row after completing the sweep of St. Lawrence on Saturday with a 5-1 win on the road at Appleton Arena.

Ethen Frank had two goals to lead the Broncos (10-4-0), including scoring on the power play to become the 61st player in program history to reach 100 career points. Cole Gallant, Aidan Fulp and Paul Washe also tallied on the night, while Gallant and Fulp added assists for two-point games. Senior forward Drew Worrad had two assists to total six points on the weekend.