Broncos Wrap Up 2019 Falling to No. 3 North Dakota 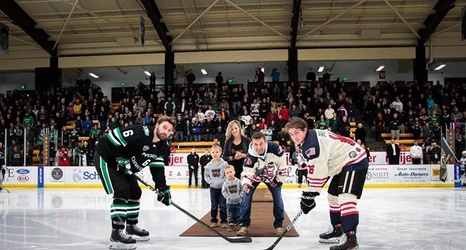 KALAMAZOO, Mich. – The Western Michigan hockey team wrapped up 2019 falling at home to No. 3 North Dakota, 8-2, on Military Appreciation Night on Saturday.

UND scored three goals in the first 10 minutes of the game to put the Broncos in an early hole. The first came at 1:33 by Judd Caufield. Jasper Weatherby pushed the lead to 2-0 at 7:37. After a major penalty was given to WMU's Cole Gallant Caufield struck again at 9:58 to go up 3-0.

Shane Pinto scored the first of his two goals for the Fighting Hawks at 18:23 in the second period to put Western Michigan down 4-0.