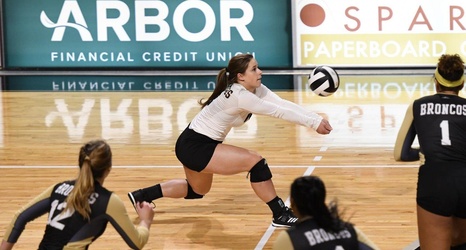 Western Michigan volleyball not only won every game they played this past weekend, but also had a sweep of all of the weekly player awards. With the winners of the Mid- American Conference West division Offensive, Defensive and Setter players of the week coming from the Bronco volleyball team.

Junior Rachel Bontrager earned the offensive player of the week after winning the tournament MVP at the Purdue Fort Wayne Invitational. Over the weekend, Bontrager had a total of 52 kills with seven service aces and 33 digs. Bontrager is now 93 kills away from joining the 1,000 kill club at Western Michigan.