Broncos Fall in OT to No. 3 North Dakota 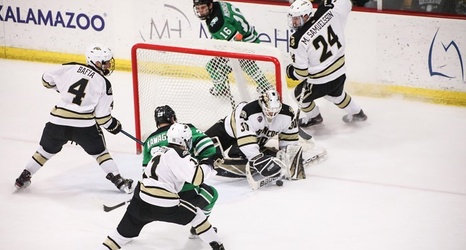 UND put an end to an electric game when Gavin Hain scored off of a turnover with 1:20 remaining in overtime. The unassisted goal was his second of the season.

The Broncos outshot the Fighting Hawks 41-34, doubling the average allowed by UND on the season. WMU had 15 shots on the power play but went 0-for-5 on the night. North Dakota goalie Adam Scheel outdueled WMU's Brandon Bussi, making a career-high 41 saves while Bussi made 33.