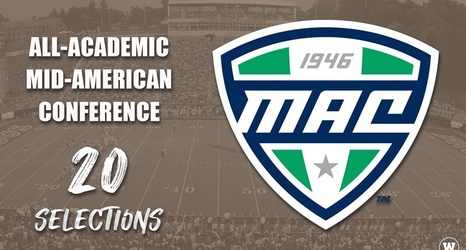 CLEVELAND, Ohio - The Mid-American Conference announced Tuesday the 2021 Football Academic All-MAC Team. A total of 217 student-athletes were named to this year's squad.

The Broncos had 20 players honored, tied for the most under head coach Tim Lester (most since they had 20 in 2018). During the Lester era, Western Michigan is third in the league in total number of All-Academic selections with 89.

The Academic All-MAC honor is for a student-athlete who has excelled in athletics and academics. To qualify, a student-athlete must have at least a 3.20 cumulative GPA and have participated in at least 50 percent of the contests for that particular sport.