Tops' Bassey picked by 76ers in second round of NBA draft 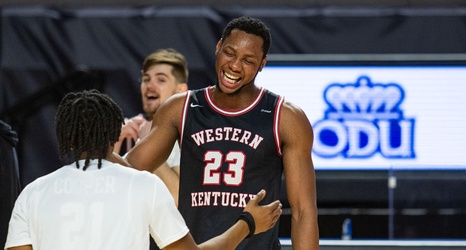 Charles Bassey got the call he was waiting for on Thursday night, as the former Western Kentucky men's basketball star was picked by the Philadelphia 76ers in the second round of the 2021 NBA Draft.

Bassey, the Hilltoppers' standout 6-foot-11 center, was the No. 53 overall pick in the draft and became the first WKU player selected in the draft since Jeremy Evans in 2010.

Bassey averaged 17.6 points, 11.6 rebounds and 3.1 blocks in 28 games this past season as a junior for the 21-8 Hilltoppers. Bassey ranked fourth nationally in blocks per game, fourth in defensive rebounds per game, fifth in total rebounds per game, second in double-doubles and 12th in field goal percentage.