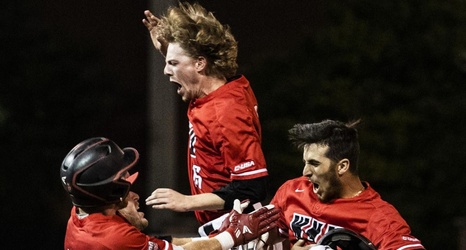 The Hilltoppers fought back from two deficits and held on in extra innings to defeat Old Dominion 8-7 on Friday night to snap a four-game losing streak.

Kevin Lambert’s single in the bottom of the 14th inning scored Jake Sanford as the winning run in the longest game WKU has played since going 18 innings against Kentucky in 2013.

To earn that win, WKU (25-26-1 overall, 16-12-1 Conference USA) overcame a 3-0 deficit, a 7-3 deficit two innings later and tied the game in the bottom of the ninth to force extra innings. Adding to that was a stellar pitching effort of Dalton Shoemake, Jacob Green and Bailey Sutton throwing 10 scoreless innings that left the Hilltoppers with a sense of relief on senior night at Nick Denes Field.