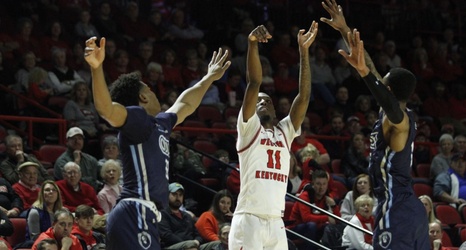 The WKU men’s basketball team (13-6, 6-1 C-USA) opened its rivalry series with Marshall (9-11, 3-4 C-USA) on Wednesday night, and the Hilltoppers claimed a come-from-behind thriller in Game 1 of the hardwood edition of the Moonshine Throwdown with a 64-60 Conference USA triumph in the Cam Henderson Center in Huntington, West Virginia.

The latest battle between the Hilltoppers and Thundering Herd was the first of a unique two-game set that will pit the two rivals against each other twice in four days.

WKU trailed by 19 points with 1:17 left in the first half, but the Hilltoppers outscored Marshall 39-21 in the second half to reach a four-game winning streak for the second time this season.