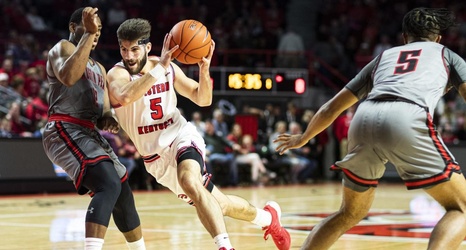 Justice knocked down four first-half 3-pointers and finished with a team-high 22 points in the Hilltoppers’ 97-75 win Saturday.

Justice was 2-for-6 from beyond the arc and had 15 points in his first regular-season game at WKU – a 76-64 win over Tennessee Tech on Tuesday – after transferring from IUPUI in the summer. His first of five 3-pointers Saturday came with the game tied 8-all after a layup from Bowling Green graduate and OVC preseason Player of the Year Terry Taylor. Justice followed with a layup to put the Hilltoppers (2-0) up 13-8 and they wouldn’t trail again.