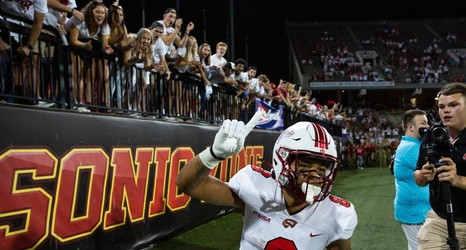 Facing third-and-5 after drawing UT Martin offside midway though the second quarter Thursday, Western Kentucky got the Skyhawks to jump again and were given a free play.

Quarterback Bailey Zappe saw the flag fly, pointed down the field for receiver Jerreth Sterns and took a successful shot as three defenders converged for a 36-yard gain.

It was just one play in a big night for the Hilltopper offense, but it showed the connection from the Houston Baptist transfers the program had hoped for entering the season.

“When we do stuff like that and the defense jumps, it’s offsides so it’s a free play – you can take a shot and an interception, ball is still ours – and he’s smart enough to understand when that happened, the middle of the field was open, so he just took advantage of it,” Zappe said.