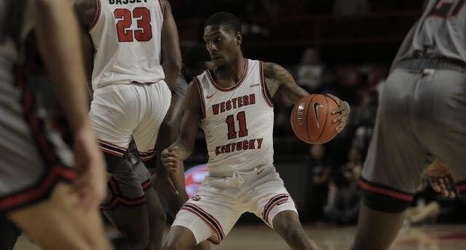 The WKU men’s basketball team (2-0) picked up its second consecutive victory to start the 2019-20 season by defeating Austin Peay (1-1) 97-75 on Saturday afternoon in Diddle Arena.

The Hilltoppers shot 60% from the floor and made 26-of-29 free throws against the Governors. Each player in WKU’s starting lineup reached double figures in scoring, combining for 76 points.

The Governors were out-rebounded 37-28, but they collected 20 offensive rebounds, compared to WKU’s 12. APSU outscored the Hilltoppers with points in the paint at 34-32.

On Tuesday night, WKU’s bench only scored 10 points. However, the Hilltoppers’ bench had 21 points against the Governors, and Stansbury loved the improvement he saw out of his bench players.