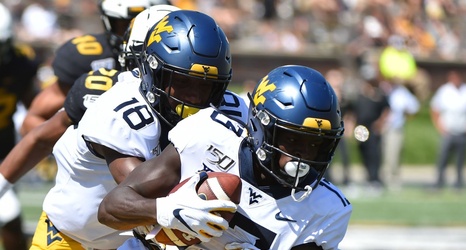 To top off a weekend that shocked almost everyone who loves everything WVU football, Sam James being named the Newcomer of the Week in the Big 12 was probably he least shocking.

The Richmond Hill, Georgia native racked up 212 yards of total offense in his third career game for the Mountaineers.

James, who received consistent praise from Head Coach Neal Brown, seemingly from the opening of camp, had his biggest day as a Mountaineer and set the stage for things to come.

Sam James was on the receiving end of quarterback Austin Kendall’s first touchdown of the day, ending a 66-yard drive with a 20-yard touchdown catch.