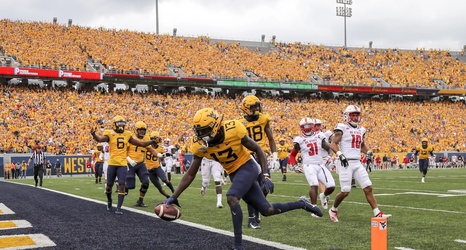 Sam James, redshirt freshman wide receiver for West Virginia, has been named Newcomer of the Week by the Big 12 Conference for week three of the 2019 season. Jones and the Mountaineers defeated N.C. State 44-27 on Saturday.

On Saturday, James hauled in nine passes for 155 yards and one touchdown. He also added three kickoff returns for 50 yards (16.67 yards per return) and had one rush for seven yards.

This award has been coming for the Richmond Hill, Georgia, native. James is the team leader in receiving yards (222) and receptions (20) this season. Against James Madison, he returned three kickoffs for 54 yards and caught six passes for 32 yards.