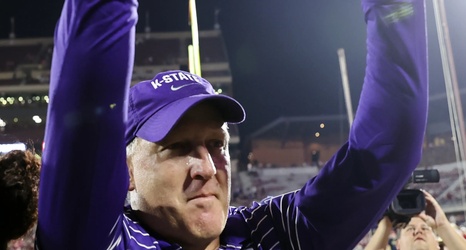 Adrian Martinez responded to a week of criticism with the game of his life, racking up 382 yards of offense himself as he led Kansas State to a decisive 41-34 win over the Oklahoma Sooners Saturday night at Memorial Stadium in Norman. Martinez, after three weeks of being overly conservative, came out of the gate throwing the ball downfield. On the first two Wildcat drives the offense moved effortlessly, aided by three big catches by Ben Sinnott; K-State (3-1, 1-0) cashed in twice on six-yard touchdown plays, one on a keeper by Martinez and the other on a pass to Malik Knowles.