West Virginia tries to pull off another upset against Baylor 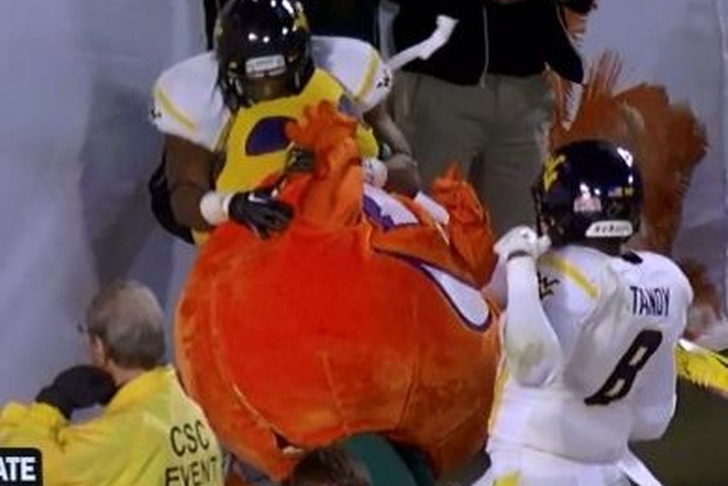 The Mountaineers are coming off a huge victory after upsetting 11th ranked Oklahoma State.  Now West Virginia has another difficult task as they head to Waco, Texas to battle the Baylor Bears.  The Bears are currently ranked 17th, but much like Oklahoma State they have not played anyone as close to the talent that West Virginia brings to the gridiron.

Clint Trickett got his very first start last week and while many fans weren't sure he would do well, he proved them all wrong.  He threw for 309 yards and one touchdown, though his

completion percentage was just under 50% and he did throw two interceptions.  That may not seem impressive, but the interceptions came in the first half and Trickett was still trying to find his niche in the offense at that point.  He played solid in the second half making big throws when West Virginia needed them and kept the offense rolling long enough to hold onto the lead.

Trickett made the Cowboys' defense look silly at times and the receivers were able to take full advantage of it.  Baylor is in the position that the Cowboys were in, not having played a single team that is close to the caliber of the Mountaineers.  Their defense is allowing just over 7 points per game, but that was against scrub teams.  They are also giving up just under 200 yards to opposing quarterbacks.  Trickett should be able to surpass this number since the talent around him is much better than the three other teams the Bears have played thus far.

The Mountaineers struggled running the ball against the Terrapins, but they seemed to bounce back a little bit last week.  Charles Sims was the leading back, rushing for 60 yards and one touchdown on eighteen carries.  He was also quite efficient in the passing game hauling in five catches for 82 yards.  Sims is a nice dual threat back and has helped West Virginia quarterbacks get out of a lot of sticky situations this season.

Dreamius Smith on the other hand had a problem getting things going last Saturday running for just five yards on ten carries.  Luckily for these running backs Baylor’s defense is allowing 110 yards to running backs per game this.  Both of these WVU backs could have big games if they can penetrate the secondary.  However, one thing to keep in mind is that the run defense has only allowed one touchdown so far this year.

The receivers were coming off a horrible week against Maryland, but they definitely stepped up their game against the Cowboys.  Ronald Carswell and Mario Alford were the top receivers on the team last week.  Carswell had five receptions for 76 yards while Alford had two catches for 43 yards.  Even though the running back Sims was on again on top of the receiving charts, at least the real receivers made an appearance last week.  They will need to do the same this week, especially with Bears’ defense allowing about 14 yards per catch.

The real stars of the Oklahoma State game were the entire Mountaineer defense.  They all showed up to play and they were able to hold off the Cowboys long enough to where there was no chance they could come back and win.  Ishmael Banks got things started off with an interception returned for a touchdown.  This helped tie the game up at 7-7.  The defense continued to roll from there applying pressure to J.W. Walsh.  The final nail in the coffin was an interception by Darwin Cook that led to a field goal by Josh Lambert to seal the deal.

The defense will have to play even better this week since Baylor really isn't a pushover.  If the defense can do what they did last week and bring pressure to the quarterback then fans may see some of the same things happen.  One problem they did encounter was Walsh getting out of the pocket and running for big yardage and first downs.  Baylor quarterback Bryce Petty really isn’t known for running the ball, but he can surprise and pick up first downs as well as touchdowns.  If backup Seth Russell comes into the game, the defense also has to keep tabs on him since he is more maneuverable that Petty.

That being said one player the defense has to stop at all costs is running back Lache Seastrunk.  Seastrunk has 38 carries for 417 yards and six touchdowns on the season.  He is very quick and if the defensive line can’t stop him then the Mountaineers could be in for a long day.  However, the defensive line did a pretty good job against Oklahoma State’s running backs by either stopping them at the line or dropping them in the backfield.  They will have to do the same thing this week if they hope to stop Seastrunk in his tracks.

The Mountaineers have a big road test ahead of them on Saturday, but winning last week definitely helps.  They should be feeling more confident and a bit more relaxed heading into this game.  If they had lost lat week this would be a tough game to watch since West Virginia would have lost two consecutive games.  However, if all three phases of the game can execute like they did last week, then the Mountaineers may be able to pull off another upset.  If they do in fact win, you can count on there being plenty of couches on fire as well as a car or two being flipped over.