West Virginia looks to bounce back against Georgia State 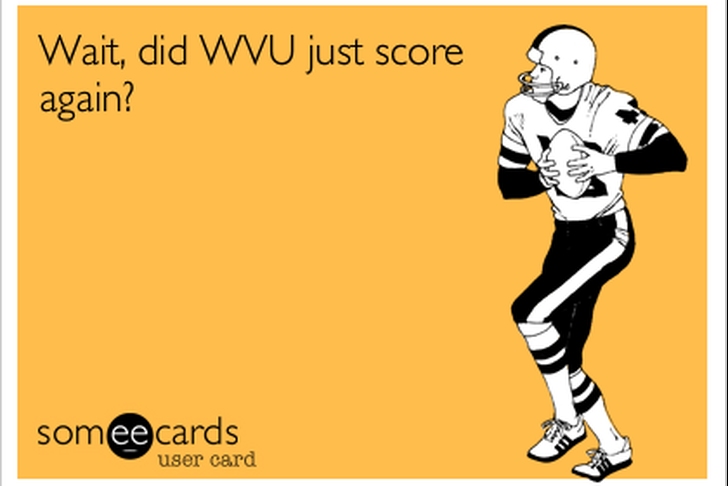 After surprising many fans last week by losing to Oklahoma by nine, the Mountaineers return to Morgantown to take on the inexperienced Georgia State Panthers.  Georgia State started their football program three years ago.  Since then have won only ten games in total.

Last week, quarterback Paul Millard struggled to get something going on the offense, leading to many three and outs.  Millard did put together a few good passing drives, but they never amounted to points on the board as vital receptions were not completed.  A bigger struggle for Millard was maintaining awareness of the time clock.  He forced Dana Holgorsen to call two important second half timeouts because he could not get the ball off in time.  This ultimately cost the Mountaineers dearly, since at several points in the fourth quarter the offense was driving hard, and those two timeouts were not available to help maintain momentum and possibly close the gap with Oklahoma.

Because of Millard's uncharateristic performance, many fans were wondering if QB Clint Trickett might get some reps in the game.  However, Holgorsen stuck with Millard to the end. It is likely he will get some playing time against Georgia State if the Mountaineers open a decent lead as expected.  It is also being reported that Ford Childress is getting more reps during practice, so there is also a chance he might play Saturday.

With the passing game struggling, it was up to the running backs to get something going.  Dreamius Smith had the lone touchdown for the Mountaineers, an impressive 75 yarder.

Oddly, after that score they hardly ran with him at all.  While Charles Sims and Wendell Smallwood contributed to the running game they still didn't bust off any big plays.  This shouldn’t be the case come Saturday since Georgia State is currently allowing 253 yards rushing per game.  They have given up more first downs to running backs than to wide receivers.

The Mountaineer wide receivers had some successes against Oklahoma.  Kevin White, who did not play in the William and Mary game due to injury, had the most receptions and yards among receivers.  He had seven receptions for 80 yards.  Look for him to be even more involved in the passing game this week.  Ivan McCartney had a few great catches that helped out the Mountaineers, but he let a sure touchdown right through his fingers. McCartney shouldn’t have too much to worry about since the Panthers’ secondary is nowhere near as solid as Oklahoma’s.  They are currently allowing ten yards per pass, which should generate first downs for the Mountaineers.

Usually, the West Virginia offense is pretty consistent, while the defense seems bogged down and has problems stopping its opponents.  Last week the roles reversed and the defense played outstanding football.  They came up with two interceptions and two fumbles.  Darwin Cook who had one of the interceptions almost had another one, but it slipped right through his fingers.  While they did have problems consistently stopping the running game, they defended the passing game surprisingly well.  This is unusual since the secondary is the one giving up the big plays and the touchdowns.

Even though Georgia State doesn't have any huge playmakers on their team, it doesn't mean that the Mountaineers should take anyone for granted.  One Panther they must keep an eye on is wide receiver Albert Wilson.  So far this season Wilson has 15 catches for 299 yards and three touchdowns.  If the Panthers do in fact score it will more than likely be because of Wilson's playmaking ability.

The WVU special teams were quite busy last week, especially the punting unit.  Nick O’Toole has seven punts for 317 yards.  O’Toole is a breath of fresh air.  If this had been last year the Sooners would have had better field position and their score would have been a lot higher.  Kicker Josh Lambert only came on the field for the extra point, but expect to see a reversal here as Lambert will probably be kicking tons of field goals and extra points while O’Toole gets to relax.

This should be a very easy game for the Mountaineers to win.  Anything less than a 30 point victory would be quite disappointing and maybe a bit embarrassing.  West Virginia should be able to put this game out of reach by the end of the first quarter.  If their offense can get going early and if their defense can play like they did last week, then there is no chance of Georgia State winning this game.