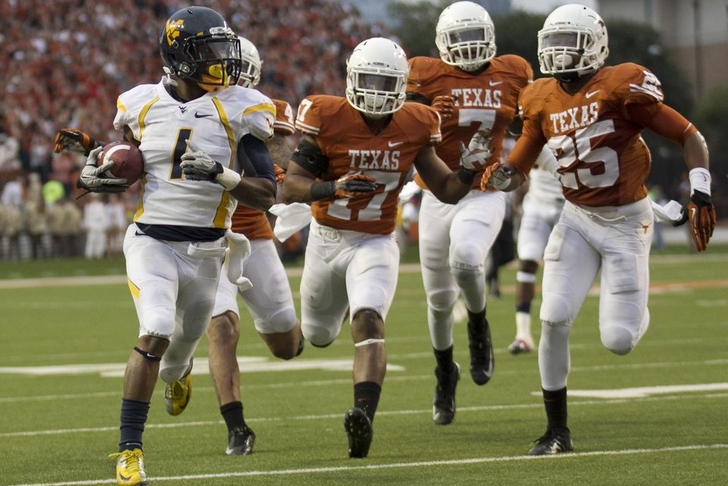 MORGANTOWN- After ending a three-game losing streak against TCU, the Mountaineers return home to take on the Texas Longhorns in primetime.

Last season, the high powered West Virginia offense, led by quarterback Geno Smith, went into Austin and helped lead the Mountaineers to a 48-45 victory over Texas. Running back Andrew Buie, no longer with the team, had a career day by carrying the ball 31 times for 207 rushing yards and 2 TDs. The loss by Texas was their first of the season (4-1, 1-1 in conference), and the Mountaineers remained undefeated at 5-0, 2-0 in conference.

Texas comes into the matchup this weekend riding a five-game winning streak. After starting the season 1-2, the Longhorns quickly faded from the national spotlight. Now at 6-2, Texas comes into their first ever trip to West Virginia with hopes of remaining alive in the conference championship hunt.

The Mountaineers enter the game looking to put together back-to-back wins for the first time all season. True freshman Josh Lambert hit a 34-yard game winning field goal in overtime last weekend at TCU to give West Virginia their first win in over a month. The Mountaineers also come into this game looking to get back to five hundred (4-5), and be one game closer to being bowl eligible.

The night game in Morgantown will be the first of the season for the Mountaineers. After playing four noon games, the players are excited to have a chance to play under the lights. Receiver Jordan Thompson says the atmosphere is special.

"There's just something about a night game at Mountaineer Field," said Thompson. "Something special is gonna happen."

The Mountaineers and Longhorns will meet up Saturday night at 7 p.m. inside Milan Puskar Stadium. The game will be broadcast by Fox.

- The trip to Morgantown will mark the first to West Virginia for Texas in program history.

- West Virginia senior linebacker Doug Rigg is out for the next two games (Concussion).

- Texas will be without quarterback David Ash due to injury.

- Texas has a five-game winning streak coming into the game against West Virginia.

- The Mountaineers have a 3-1 home record this season while going 1-4 on the road. Texas is 3-1 on the road (includes Red River Rivalry against Oklahoma).