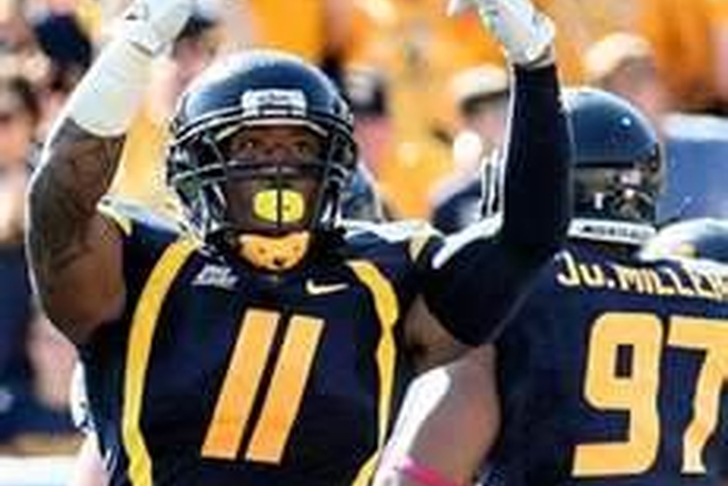 Bruce Irvin was drafted the No. 15 overall pick by the Seattle Seahawks in 2012. So far this season he compiled 4.5 sacks. These sacks have come against some of the best in the business such as Cam Newton, Aaron Rodgers and Tony Romo.

The sack against Cam Newton caused a forced fumble, which sealed the win for the Seahawks.

Quarterbacks change their plays based on where he is lined up. Pretty good for player who most people thought was drafted too high.

Irvin is succeeding in one of the toughest professions, yet he still represents West Virginia University. His twitter background isn't him in a Seahawks uniform; it’s him wearing the Gold and Blue. He knows who gave him a chance and supported him throughout his college years. the mountaineers.

To say that Irvin has a troubled past is an understatement. Dropping out of high school as a junior because his grades were not good enough to play football, being homeless on a few occasions, arrested and spending time in jail for theft is only a portion of what Irvin had to overcome.

But just like a Mountaineer, he climbed; and never looked back after being recruited to WVU from Mt. San Antonio Community College.

Irvin never fails to give thanks to his WVU fans.

"They support me both on and off the field," he said. "A lot of places, they only care what you do on the field. Not here. I feel like I'll always have a home in West Virginia." Irvin said to Charleston Daily Mail Journalist, Kara Moore.

Irvin became so popular at WVU that the fans came up with a cheer just for him. When he would make a tackle behind the line of scrimmage or sack the opposing quarterback, the entire mountaineer stadium would come alive and all you would hear were the fans cheering “BRUUUCE!!”

The cheer became so common that the Seattle fans have picked it up and now every time Irvin makes a play he once again hears the long drawn out version of his name.

He recently wrote on his twitter page that he would be at the Kansas State game, and I’m sure the fans can’t wait to see the man who was known for his two years at WVU as “BRUUUCE!!”

And who knows maybe his presence will restore our defense back to former glory.