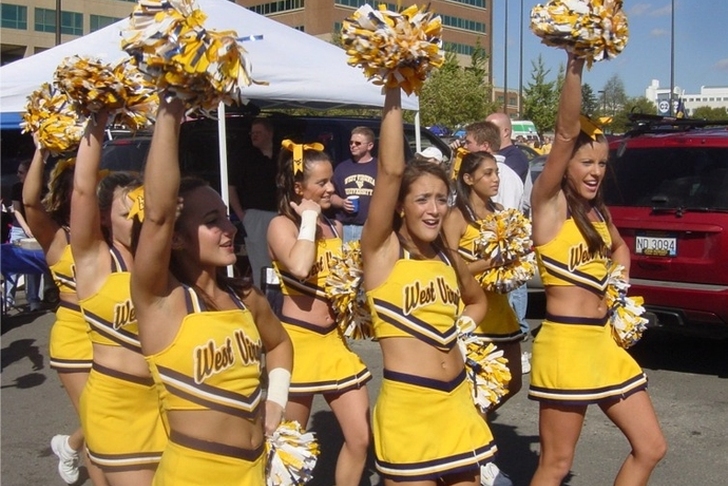 What other university shuts down an entire hospital parking lot for game day? Tailgating at WVU is an experience that is unlike any other. From the Blue Lot, to all the way across Morgantown, you will find alumni living out their glory days, and students ready to cheer on the Mountaineers. A. One of the main reasons why Milan Puskar is such a difficult trip for away teams is because of the energy and passion of the student section. With over 25,000 students, it’s hard not to get loud and be excited.  WVU is also famous for “Tent City” the week long camp out that started when ESPN’s College Game Day came to Morgantown in 2014 for the TCU game.

B. Pitt’s student section on the other hand is another story. They are notorious for not being able to fill student seats, and blame every reason in the book. From being off campus, to not producing wins, Pitt cannot pull off the attendance that major D1 programs need to have to survive. 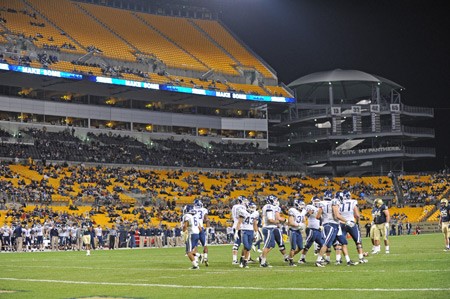 Unlike Pittsburgh, where there is an abundance of professional sports to choose from, West Virginia has no professional teams. So WVU fills that void, and that means that on game day the whole state of West Virginia comes together to cheer on the Mountaineers. No matter what state you were born in, if you go to WVU, you support West Virginia.

4. Morgantown on a Game Day

Morgantown is a town that embraces all things WVU, and game day is no exception. Streets close down, and businesses bring out their gold and blue to support WVU. From the minute you wake up on a game day, there is a certain kind of electricity in the air. From downtown, to Milan Puskar, everyone is happy to be a mountaineer. Game day is the only time where students are voluntarily up before 8 A.M on a Saturday, and liquor stores are open before Noon. It’s tough to for big cities, like Pittsburgh, to compete with the environment of a college town. Especially Morgantown. Big 12 Football has some of the best teams in the country. Texas, TCU, Oklahoma, and Oklahoma State are just some of the teams that we play every year. The Big 12 is a powerhouse for football; and consistently has teams ranked and teams that can perform. The Big 12 is also extremely unpredictable, every game can have an unexpected outcome, and that makes Big 12 football even more exciting.

A relatively new tradition, the Mantrip was started in 2011, and has been something that fans, players, and coaches all look forward to. Nothing pumps up a team more than walking through thousands of people screaming for you. It’s an awesome pregame ritual.

Besides our football program, WVU also has a phenomenal band that adds on to the experience of attending a WVU football game. The Pride of West Virginia always brings something new to half time shows, and always adds on to the pregame flare and excitement. The Pride has also been invited to perform at one of the biggest events for bands across the country, the Macy’s Thanksgiving Day Parade.

Pitt may have a Panther, but WVU has the Mountaineer, which is one of the few live human mascots in college sports. The Mountaineer is a huge honor for the WVU student that portrays him (or her), and is the face of WVU during their period as being the mascot. What other mascot gets to carry a musket, and shoot it off before almost every athletic event!? The Mountaineer also got to join Brad Paisley on the AMA red carpet this year, and had a cameo in  his Country Nation music video.

While WVU gets rowdy, we also understand the concept of being a Respectful Mountaineer. Time and time again, visiting families publicize how respectful and nice student and alumni were to them. Even though we love to win, we can handle a loss with grace (at least the majority can).

Nothing beats a WVU victory, and the best tradition after a win is Country Roads. The John Denver classic has been the WVU anthem since the 1970’s. And it has been sung at every home game since 1972.  Singing Country Roads is one of the most well known traditions at WVU, and something that every mountaineer looks forward to. Win or lose, WVU is a special place on game day and every other day.