Kidderminster's thrilling FA Cup run ends with rival managers sharing a beer, a frenzy of shirt swapping... and West Ham and England star Declan Rice joining them in the showers! 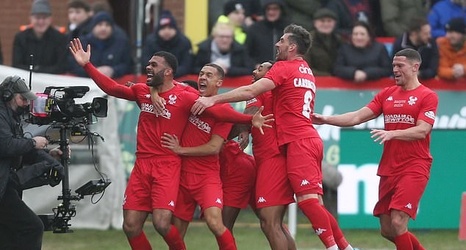 With their thrilling FA Cup run at its heartbreaking end Kidderminster Harriers turned minds to souvenirs and celebrations, and pride eclipsed disappointment.

On the back row of the main stand, manager Russell Penn grinned as he pulled a tightly-rolled West Ham shirt from a jacket pocket and filed away the memory of his duel with David Moyes and their brief chat over a beer in his office.

Alex Penny, Harriers scorer and so very nearly the match-winner, tried to fathom how Jarrod Bowen, a former team-mate when they were starting out at Hull City, had won the game in stoppage time at the end of extra time.