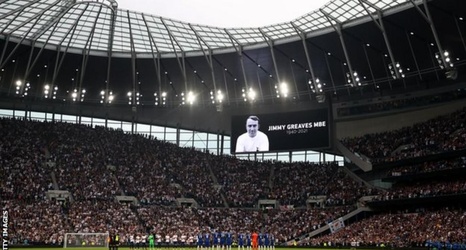 Tottenham and Chelsea led the tributes for their former player Jimmy Greaves, who has died aged 81.

A host of Spurs legends lined the pitch inside the Tottenham Hotspur Stadium as a minute's applause was held before kick-off.

During the applause, some Spurs fans held flags and banners to remember the club's record goalscorer.

On an emotional day across football grounds, West Ham, another of Greaves' former clubs, also held a minute's applause before their Premier League match against Manchester United, as did Brighton and Leicester City.