Havertz, Pulisic show they can be potential solutions to Tuchel's biggest problems at Chelsea 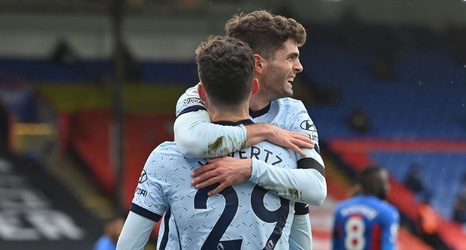 It would be an unexpected bonus for Chelsea if Kai Havertz discovered his best form while also solving what has become a problem position for Thomas Tuchel.

The expectation remains that the Blues will sign a centre-forward this summer with senior figures at the club believing they are competitive in the race for Borussia Dortmund's Erling Haaland. The Blues are also keeping tabs on several other options including Manchester City's Sergio Aguero.

But someone has to emerge from the existing squad to help Chelsea end the season strongly and although Timo Werner, Olivier Giroud, and Tammy Abraham will all make their case, Havertz appears a credible candidate after this authoritative 4-1 victory over Crystal Palace at Selhurst Park.