Chelsea 'fail with a fresh approach for Declan Rice' as Thomas Tuchel continues to eye a move for the West Ham midfielder... with London Stadium officials 'not willing to sell for less than their £150m asking price' 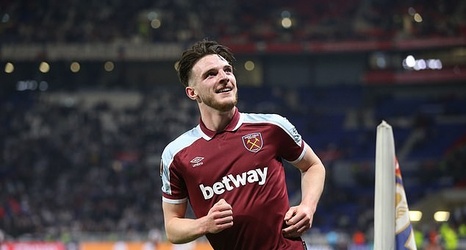 West Ham have reportedly turned down a fresh approach for captain Declan Rice from Chelsea.

It has been reported by 90min that Chelsea have again reached out to the Hammers in their pursuit to sign the England international during the summer transfer window.

West Ham though have kept a stern resolve when it comes to keeping their star player and they have long insisted that the 23-year-old will not be sold for anything less than their £150million asking price.

The Blues are said to have contacted West Ham's majority shareholder David Sullivan at the orders of new owner Todd Boehly about conducting a potential deal.