Andriy Yarmolenko will leave West Ham this summer as one of four first team stars being released... with the Hammers announcing TEN out-of-contract players are being let go 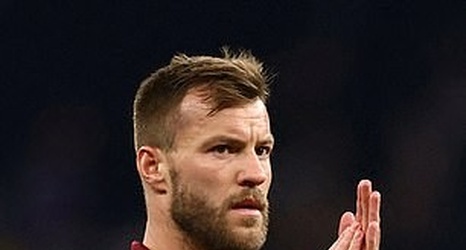 West Ham have confirmed four first-team players will leave the London Stadium this summer following the expiry of their contracts.

Along with retiring midfielder Mark Noble and goalkeeper David Martin, winger Andriy Yarmolenko and right back Ryan Fredericks will also depart on free transfers on June 30.

Yarmolenko joined West Ham from Borussia Dortmund in 2018 and has made 86 appearances, scoring 13 goals, in his four years at the club.

Andriy Yarmolenko (left) is one of four first team players being released by West Ham this summer, with midfielder Declan Rice (right) paying tribute to the winger on Instagram

The experienced Ukraine international has been linked with a move to newly-promoted Fulham.