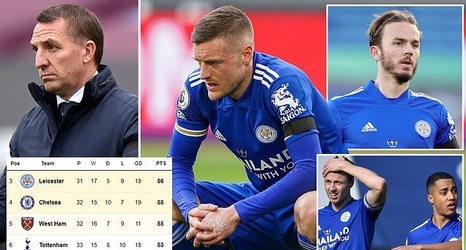 Part of the reason Europe’s top clubs wanted a Super League was to avoid inconvenient surprises like Leicester becoming champions of England. Yet on this evidence, the Foxes will continue to irritate the elite for some time yet.

Five days after reaching the FA Cup Final, Brendan Rodgers’ side took a step closer to a place in next season’s Champions League by swatting aside woeful West Brom. Jamie Vardy broke a goal drought lasting more than two months and further strikes from Jonny Evans and Kelechi Iheanacho ensured the game was won by half-time.

After losing their last two in the league, Leicester now have a four-point cushion to fifth-placed West Ham, with six games left.