Jurgen Klopp backs Nathaniel Phillips and Rhys Williams to have 'proper careers' at Liverpool or elsewhere after the pair stepped up in the Reds' hour of need to replace injured star defenders Virgil van Dijk, Joe Gomez and Joel Matip 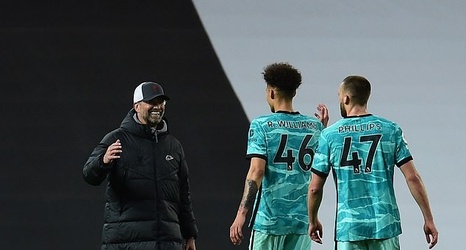 Jurgen Klopp says Nathaniel Phillips and Rhys Williams have proved they can cut it at the highest level and will go on to have 'proper careers' at Liverpool or elsewhere in the long-term.

Season-ending injuries to Virgil van Dijk, Joe Gomez and Joel Matip meant the inexperienced Phillips, 24, and Williams, 20, have been thrown in at the deep end this season, along with 21-year-old January loan signing Ozan Kabak.

Liverpool will move to within a point of a Champions League spot if they chalk up their third straight win, at West Brom on Sunday.