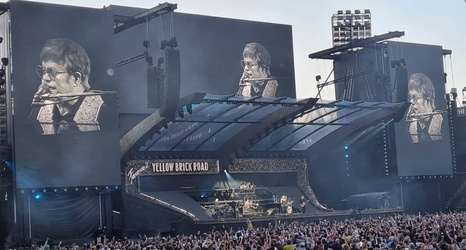 Sir Elton John has played the first of his two "homecoming" shows at Watford Football Club.

The 75-year-old singer announced 3 and 4 July dates at the Championship club's Vicarage Road stadium to finish the European leg of his Farewell Yellow Brick Road tour.

He became chairman of the club in 1976 and is now honorary life president.

Announcing the two concerts last year, he said: "I simply had to play Vicarage Road a final time."

The Candle In The Wind singer oversaw a period of great success for Watford FC after appointing Graham Taylor as manager of his boyhood team in 1977.