Wizards Weekly: Washington Hoping To Get Back On Right Side Of Playoff Picture 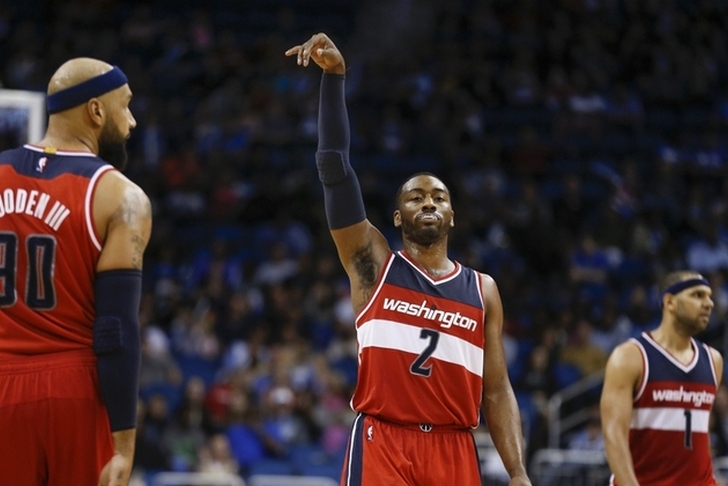 The Washington Wizards have put themselves back in the playoff picture, but are still on the outside looking in. The 34-35 Wizards are one and a half games back of the No. 8 seed, currently held by the Chicago Bulls. They are just two games back of the Indian Pacers for the No. 7 seed. Washington's four game-win streak has helped them climb back into the race. Let's get you up to speed with the week that was and the week ahead with our Wizards Weekly update:

Last Week:
The Wizards entered last week on a five game losing streak. They snapped that Monday in a 124-81 blowout of the Detroit Pistons. Seven players had double figures for the Wizards, led by Nene Hilario's 20. John Wall had 15 points and 12 assists.

The Wizards picked up another win over a playoff bubble team at home Wednesday, beating the Chicago Bulls 117-96. John Wall posted a triple-double with 29 points, 12 assists and 10 rebounds.

Washington hit the road the next night to face the Philadelphia 76ers, and Wall had yet another triple-double. He posted 16 points, 14 assists and 13 rebounds. Marcus Thornton was actually the leading scorer, posting 18 points off the bench.

Down 10 at the half, the Wizards rallied for a 99-89 win over New York Knicks Saturday. There was no triple-double for Wall, but he did have 24 points and 10 assists.

What's Next?
Washington plays four games next week, with two against the Atlanta Hawks. The Wizards visit the Hawks Monday, and then host Atlanta Wednesday. The Wizards stay at home Friday against the Minnesota Timberwovles. It's then the first game of a five-game trip west, starting with the Los Angeles Lakers. For more on the Wizards' upcoming games, download the Chat Sports Android and iPhone app.

What They're Saying About The Wizards:
The Rise Of Markieff Morris
Morris Is Helping The Team On Defense
Wizards - Hawks Preview