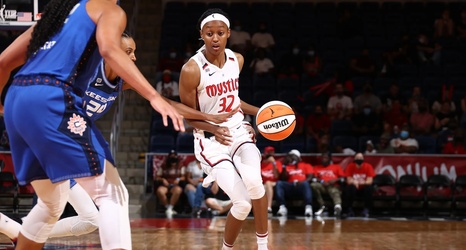 Much of the pregame talk revolved around who was missing for the Mystics. Still, the starting five quickly had fans on their feet at Entertainment and Sports Arena — Myisha Hines-Allen tucked the ball inside to a cutting Natasha Cloud for a nifty two. Seconds later, Shatori Walker-Kimbrough drained a 24-footer.

After a high-octane first quarter, during which neither team led by more than six, the Sun went into the break with the lead, 22–16.

Four quick points for Connecticut off turnovers forced an apoplectic Mike Thibault to ask for a timeout.