Mystics vs Mercury final score: Tianna Hawkins has a career-high in Washington’s 91-68 loss to Phoenix 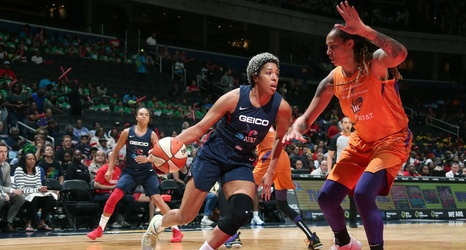 Washington just couldn’t get the job done Wednesday morning as the Phoenix Mercury downed the Mystics, 91-68. Mercury held Washington to just 24 second half points, 10 alone in the fourth quarter. Elena Delle Donne’s game status went from questionable to out, so the Mystics had to get creative in the starting line-up and with those off the bench.

Mercury found a way to have an advantage early on by limiting Kristi Toliver either by double-team or brick wall defense by Briann January. Toliver only put up six shots, making three ending the game with seven points. Another stat shocker for Toliver was she shot two three-pointers, knocking down only one of them.