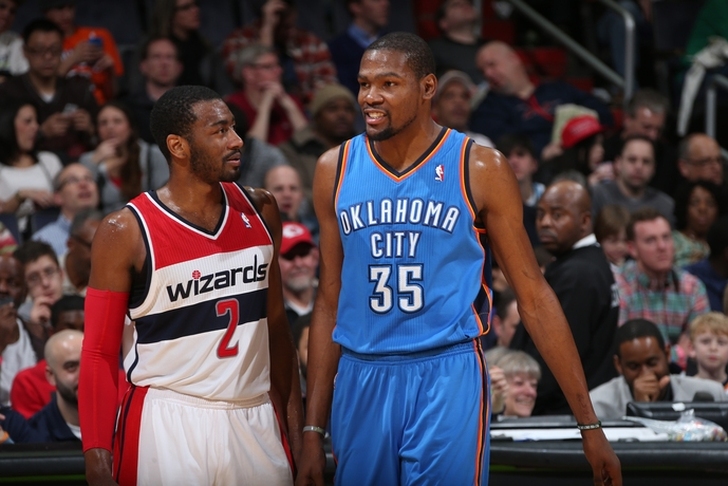 After missing the playoffs for the first time since the 2012-13 season, the Washington Wizards are looking to free agency to add the pieces they feel are necessary to help them get back there. With the offseason nearly here, the Wizards are narrowing their focus on a few players that they'll try to land. Here's all the latest Wizards rumors and news you need to know.

Washington Giving Up On Durant?
The Wizards would have love to land hometown hero Kevin Durant, but their chances with Durant are now over. CSN MidAtlantic reports the team will pull out of the Durant sweepstakes.

"They've moved on, and league sources tell CSNmidatlantic.com on Monday that the idea of returning home just "doesn't resonate" with the NBA's hottest unrestricted free agent," reports J. Michael. "There'll be no meeting."

Chasing Durant was a smart move by the Wizards at the time, but pulling out now is also the right call. They aren't going to land him and bailing now will allow them to pursue more realistic targets.

"Now that Kevin Durant has dropped from the wish list for the Wizards with free agency set to open at the end of the week, Ryan Anderson is their next priority, multiple league sources tell CSNmidatlantic.com on Monday, and they’ll make an aggressive move in hopes of securing the three-point shooting forward," reports J. Michael. "... The Wizards will have a lot of competition for Anderson’s services. He may command in the range of $17 million in the open market, one league GM projected in an interview with CSN recently."

Anderson would become a stretch four for the Wizards, who also have Markieff Morris. He'd be the replacement for Jared Dudley. That $17 million might be a bit too much for the Wizards, so they could look for a cheaper option.

Interest In Darrell Arthur?
The Wizards can't land Anderson, they could end up with Denver Nuggets PF Darrell Arthur. He's on their "shortlist of targets," according to CSN MidAtlantic. Arthur is a versatile forward who fits the stretch-four role the Wizards are looking to fill. He's not as talented as Anderson, but he should be a cheaper option.

Follow our Washington Wizards team page for all the latest Wizards rumors or download the Chat Sports App!