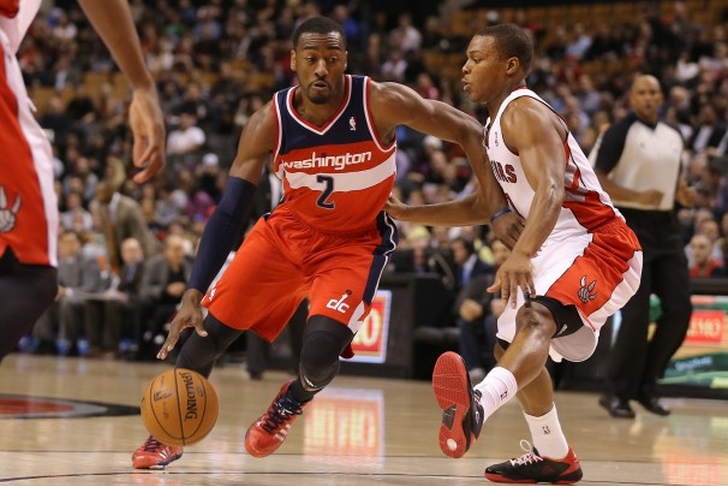 The Washington Wizards (33-20) take on the Toronto Raptors (35-17) on Wednesday night in a battle of two of the East's best. The Wizards head into the matchup in 4th place in the Eastern Conference, while the Raptors are 2.5 games ahead of them in second place. Both teams have won two in a row, and will be looking to extend that streak to three.

Where? Air Canada Centre, Toronto, ON

How will the ailing Wizards look?

Washington SG Bradley Beal will miss his third straight game with a toe injury, and John Wall picked up a minor ankle sprain against the Magic on Monday. Kris Humphries isn't as important to the Wizards as their starting backcourt, but he's quietly having a very good year off the bench...unfortunately for Washington, he missed practice Tuesday with a back issue, and he's currently listed as day-to-day. Wall will try to play through his injury, but keeping up with Raptors All-Star PG Kyle Lowry is hard enough even without a bum ankle.

The Wizards have won two straight after a brutal sequence that saw them go 2-7 between January 28 and February 5. This win could be a huge morale boost heading into the All-Star Break, and the Wizards desperately want to avoid a bad loss after (seemingly) breaking out of their slump.

Can the Raptors stay hot?

While the Wizards have struggled lately, Toronto has been heading in a different direction. The Raptors have won eight of their last 10, and while they're a way off from catching Atlanta, they can improve their hold on the #2 seed with a victory.

PF James Johnson has been superb in his last two games since returning from injury - he scored 36 points in 49 minutes in wins over the Clippers and Spurs while shooting an absurd .882 from the field. DeMar DeRozan is getting back to where he was before a groin injury sidelined him for almost a month and a half, and Kyle Lowry is still playing well despite his slipping shooting percentage. If DeRozan and Johnson can keep the momentum going, they'll be hard to stop.

Toronto has the momentum and the home-field advantage, so it's impossible for us to pick a Wizards team with Bradley Beal out and John Wall at less than 100%. The Wizards have the depth and the talent to make it close, but the health factor in play here makes it less than a fair fight.