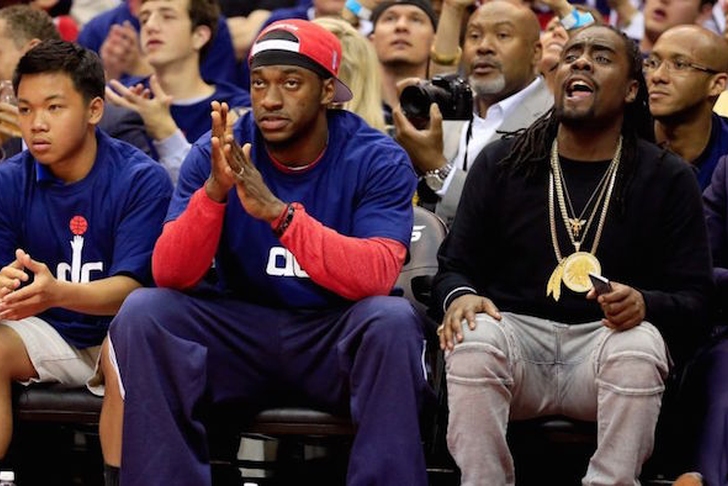 The Washington Wizards are relevant in the basketball world for the first time in nearly a decade, and now seem prepared to make a crossover into hip-hop culture. The franchise hired D.C.-based rapper Wale to be their "creative liaison" last season, and he discussed his plans for the franchise in an interview with ESPN the Magazine.

"I want to be a shot in the arm to DC basketball. My job is to provide a spark, at all costs. I'm not going to do anything corny, but I'm talking to Kanye about designing new uniforms. I want to see the phone booth rocking every time I come here. I want to create the 'Lake Show,' create what the Bulls had. I want to take the personality of our stars -- John, Otto, Marcin -- and create what Kemp and Payton had, what LeBron and D-Wade had. That's the vibe I want."

Look, I can remember that fuzzy reception on Fox 45 watching Calbert Cheaney and Chris Whitney and those teams lose to the Phoenix Suns by 15, 20. But now? Now we have a team to be proud of. And even if you're coming to a game for the wrong reasons, like trying to win a pair of shoes or something, I want you into it. We want to sell this place out.

Washington currently has the No. 2 seed in the Eastern Conference and are one of the favorites to advance to the NBA Finals.