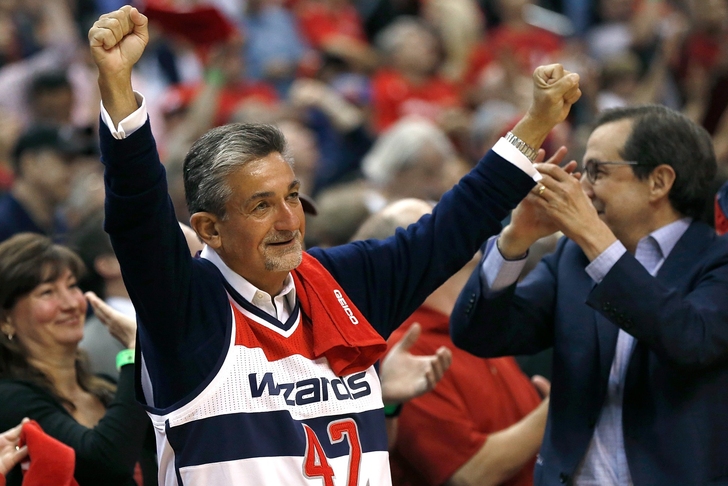 Washington Wizards point guard John Wall is out indefinitely with five small fractures in his left wrist, and there is doubt as to whether he can return for any of the postseason. Wall insists that he'll be ready to go sometime this series against the Atlanta Hawks, but Wizards owner Ted Leonsis says the team won't put him on the court if doing so will hurt Wall's future:

“No, I would never do that. I think that would be inappropriate. He’s probably got enough pressure on himself. And to be straightforward, we’ve got to do what’s in the best interest of the player in this case, so you don’t want to do anything that would jeopardize his health in any way. And he’s such a competitive player, he’ll want to play. And it’ll be up to him and people around him and us to make sure that he doesn’t do anything that would hurt himself, because he’s going to have a really, really long career here.

“Injuries happen. For us, it’s our point guard. If you look at the stats, John has the ball in his hand and does things with the ball more than any other player in the league. It’s absolutely the wrong guy. He’s a starting first-team all-star.

“But we’re now at the point where the team thought it should have won [Tuesday] night. I thought we should have won [Tuesday] night. The team doesn’t think if John Wall doesn’t play, that’s it. And so that’s another sign to me that we’ve developed, that we’ve got a lot of talent, that we’ve got a lot of depth. The team certainly feels that if John Wall is playing and Bradley Beal is playing, that they can be one of the best teams in the East.”

Game 3 between the Wizards and Hawks will be Saturday at 5:00 p.m. ET on ESPN.