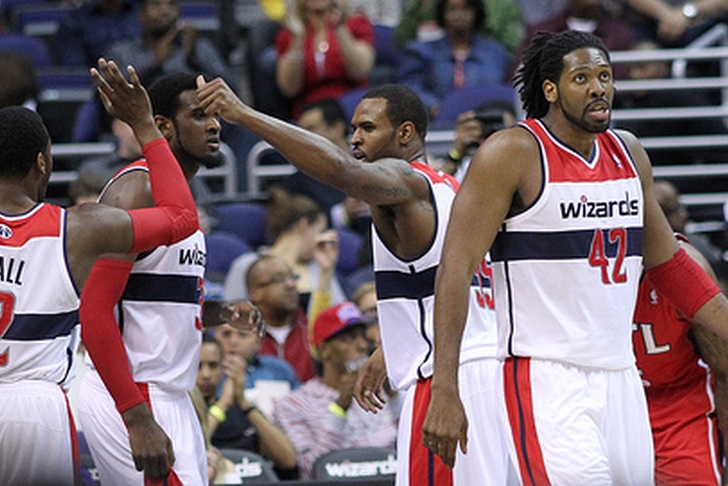 1. Which Wizards player is poised to have a breakout season?

It is very possible that more than one Wizard will breakout this season as most are anticipating the Wizards to be much improved. With that said, I’ll go with the man who recently received a designated franchise player maximum contract, John Wall.

With a healthy John Wall at the helm, the Wizards should be ready to make that leap into playoff contention.

[caption id="attachment_276" align="alignnone" width="200" caption="Is this the year Wall leads the Wizards to the playoffs?"]

This preseason, Wall’s defense looks improved as well. With his 6’4” frame, long arms and quickness; look for Wall to become a prominent force on the defensive end this season.

2. Which Wizards player is the biggest Wildcard?

The definition of wildcard for the Wizards is Jan Vesely. The former 6th overall pick has yet to blossom into the player the Wizards front office hoped for when drafting him ahead of Klay Thompson, Kwahi Leonard and Iman Shumpert in the 2011 draft.

Vesely has seemingly got worst each season since entering the league. Last season he averaged a roaring 2.5 ppg while hauling in an astounding 2.4 rebounds per contest. Another huge concern is his inability to shoot free throws as he shot 30% from the charity strip last season.

So far this preseason, we have seen much of the same from Vesely, which is nothing spectacular. However, Vesely displays a lot of effort and hustle when on the floor and at this point you got to take what you can get from him.

I think it’s possible Vesely is much better this season. (I’m not holding my breath). With Wall back healthy, Vesely should be more comfortable in his role, which will translate into more confidence and better play. He should see more minutes as well, with Okafor and Singleton out with injuries.

3. Which player should we expect the least from?

Plan and simple, I have no real expectations from the Wizards former 18th overall pick from the 2011 draft, Chris Singleton.

Singleton has shown little to no improve during his first 2 seasons in the league. The small forward came into league known for his defensive abilities. While we have seen flashes of good defense from Singleton, it hasn't been anything special.

[caption id="attachment_277" align="aligncenter" width="204" caption="Chris Singleton has failed to impress since being drafted in 2011."]

Singleton has frustrated Wizards fans with his lack of offensive skill and his unfortunate love of shooting 3-pointers. He shot 19.6% from downtown last season.

Now sidelined with a foot injury, he won’t be able to contribute until at least a month or so into the season. Honestly, I wasn’t expecting Singleton to make the final roster, but that remains to be seen.

4. Which player will exceed expectations?

[caption id="attachment_249" align="alignnone" width="184" caption="Bradley has looked like a stud throughout the preseason."]

While many are projecting Bradley Beal to breakout in his 2nd season, I'll go a step further by predicting Beal will receive legitimate all-star consideration this season as well.

Beal has dazzled during the preseason alongside John Wall. His shot looks pure and he has also shown the ability to put the ball on the floor and finish at the rim.

With Wall back running the point for an entire season (hopefully), Beal should get plenty of scoring opportunities, as Wall is a good and willing passer. These two should shine this season in their second year as a backcourt tandem. Wall & Beal will be a top 3 backcourt this season.

I predict Beal will average 21 ppg to lead the Wizards in scoring. Look for Beal to move into consideration for top 5 shooting guards in the league this season.

5. What is the biggest concern facing the Wizards heading into the season?

This biggest concern has to be the lack of frontcourt depth. Without Emeka Okafor available, the Wizards are missing their best rebounder and best interior defender.

Nene, who is preferred to play Power Forward, may be forced to play more time at Center than he or the Wizards want. With very unsettling performances from Kevin Seraphin and Jan Vesely so far this preseason, the Wizards are going to have some real issues filling Okafor’s shoes.

6. Predictions for the Wizards season?

Last year’s 8th seed had a record of 38-44, so this shouldn’t be too difficult for a Wizards team that has added talent. I do however anticipate the East will be more competitive this season with improved teams such as the Pistons and Cavaliers that didn’t make the playoffs last year.

The Wizards will finish slightly over .500 with a 42-40 record, good enough for a low seeded playoff berth. John Wall and Bradley Beal will have breakout seasons and one or both will make the all-star roster.