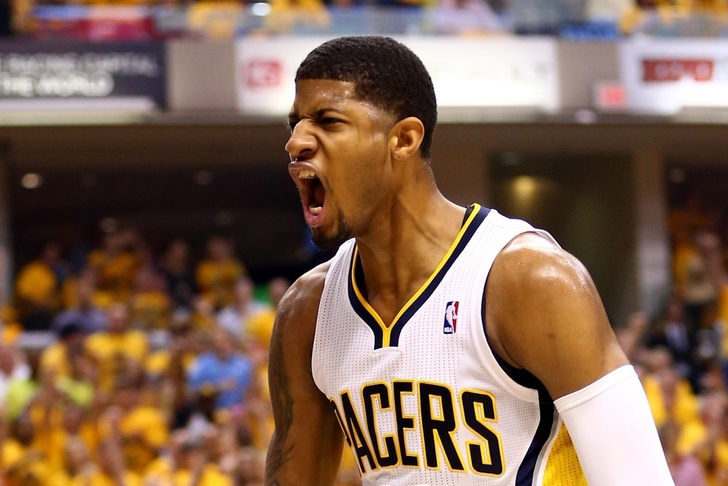 This NBA season has been nothing short of exciting. For die-hard NBA fans as myself, the 2013-14 season has had its fair share of excitement, surprises, disappointments and heartbreak (Derrick Rose’s knee injury).  With the season roughly a quarter of the way through, here are my NBA Awards recipients if they were given out today.

Yes, the Sacramento Kings have a record of 4-12 and are the second worst team in the ultra competitive Western Conference; however, DeMarcus Cousins has simply been spectacular so far this season.

The 4th year big man, who was awarded a max-extension this past offseason, is proving to be one of the best players in the NBA this year. For proof, just take a glance at DeMarcus Cousins season stats.

The former Kentucky star is averaging a double-double of a career-high 21 points and a solid 10 rebounds per game. He’s posting a career best 25.22 player efficiency rating, good for 7th best in the league. Cousins also has the highest usage rate in the NBA among qualified players at 32.0.

He is certainly not the reason the Kings are a lackluster team.

While DeMarcus Cousins can be a head-case at times with a volatile personality, he is one of the most talent players in the NBA at only 23-years-old. If he can keep this up and the Kings can play a little better, Boogie will be a top candidate for the Most Improved Player award.

My Honorable Mention for the MIP is Wizards Guard, Bradley Beal. The 20-year-old guard is the leading scorer (20 ppg) on the 9-9 Washington Wizards.

Stuckey only ended up missing the first game of the season and since then he’s been a revelation off the bench for the 6-seeded Detroit Pistons.

Stuckey is leading all bench scorers with 16 points per contest. His stellar scoring off the pine has contributed to the Pistons being more respectable this season as they look to make the playoffs for the first time since Allen Iverson was on the roster.

Jeremy Lin is in the perfect role for the Houston Rockets. Leading the second unit, Lin doesn’t have to compete with James Harden for touches as often. In addition, he provides the perfect bench complement to Dwight Howard and James Harden. Lin is averaging 15 points and 4 assists per contest.

Coach of the Year – Terry Stotts

Nobody saw this hot start coming from the Portland Trailblazers and Terry Stotts deserves a ton of credit. Not only do the Blazers hold the best record in the West at 16-3, they are fresh off impressive wins against elite teams like the Pacers and Thunder.

Terry Stotts has his team believing they’re legit and they’re playing like it. LaMarcus Alridge, who has privately requested out of Rip City in the past, has played his tail off averaging 23 points while pulling down almost 10 boards per contest.

While I think the Blazers will eventually comeback down to earth, they should finish somewhere between the 3-6 seed in the West. If so, Stotts should take home the Coach of the Year award.

Frank Vogel could win this award as well. The Pacers hold the best record in the NBA at 17-2. Vogel has his team focused, determined and prepared to be a better team than last season’s team that almost beat the Heat in the Eastern Conference Finals.

The Pacers are the stingiest defensive team in the NBA and Roy Hibbert has a lot to do with that. The former Georgetown Hoya is the anchor to the Pacers league-leading defense and I expect that to continue for the rest of the season.

The Pacers hold their opponents to league low average field goal percentage of 39% and 87.5 points per game.

Hibbert is second in the NBA in blocks per game at 3.3 a game, but leads the league in total blocks with 64.

Anthony Davis leads the leagues in blocked shots per game, so he gets my honorable mention nod. Even though he’s injured now with a broken hand and the Pelicans defense is overall is lackluster, Anthony Davis defense has been impressive so far.

While LeBron James and Kevin Durant have been impressive as always this season. My MVP pick for the 2013-14 season so far is Paul George. PG24’s rise to superstardom really began during last season’s stellar playoff run for the Pacers. George emerged as the team’s undisputed leader and has built off that this season, playing even better on both ends of the floor.

His Pacers hold the best record in the NBA at 17-2 and PG is the main reason why. He is averaging nearly 25 point per game while shooting nearly 40% from downtown. Paul George is also posting a career-high in player efficiency rating at 24.02.

George is also one of the best perimeter defenders in the league. He is committed on both ends of the floor, which makes the Pacers a good team on offense and a great team on defense.

I love the way Paul George is playing right now and the crazy part is he is only going to get better. PG24 will be in the MVP discussion all year and if the Pacers finish with the best record in the NBA, he just might take it home.

Note the statistics I provided in the Coach of the Year award section. L.A. has been spectacular this season.

The New York Knicks are easily the most disappointing team in the NBA. Last year, the Knicks finished with a record of 54-28 and lost in the Semi-Finals to the Pacers. In the offseason, New York traded for Andrea Bargnani and re-signed J.R. Smith.

Many thought the Knicks would be among the East’s elite teams (I didn’t). Instead, the Knicks are simply a mess.

The Knicks have won 1 of their last 10 games.

With a lowly record of 4-13, Melo has been the only semi-bright spot for the Knicks. Many have scapegoated Mike Woodson as the problem, but a coach doesn’t go from great to terrible in one season. There are much bigger issues here.

Raymond Felton has played subpar, J.R. has some of the worst statistics in the NBA, Amar’e Stoudemire is a shell of the man formerly known as STAT, they have no real center or leader without Tyson Chandler and Melo simply hasn’t been good enough in the closing moments of games.

The return of Tyson Chandler will definitely help, but will it be enough to turn things around? Time will tell.